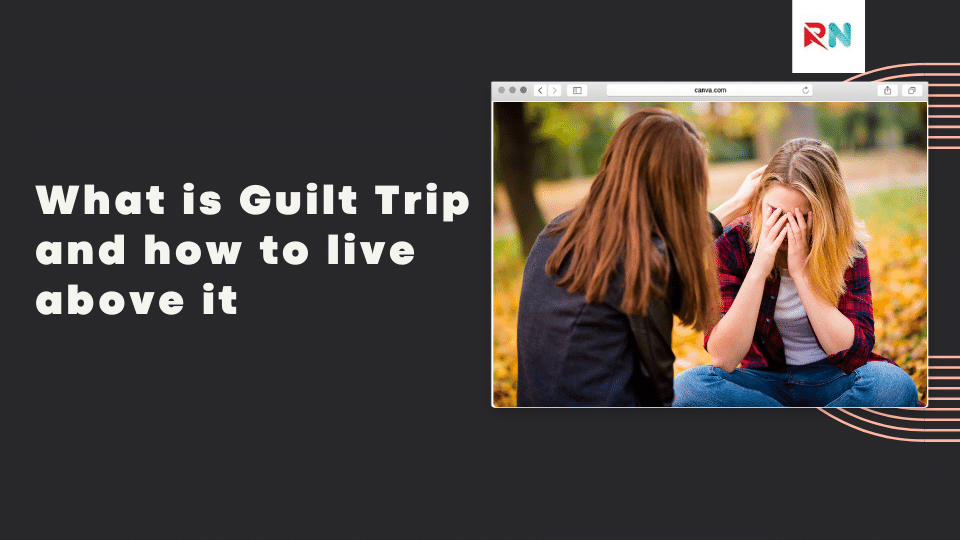 Guilt is a powerful weapon that can be used skillfully by many.

Imagine telling your best friend that you can’t make it to their party because you need to finish a project at work.

They respond, “Hardly anyone is coming yet. Nobody wants to meet me. Why bother having a party? “I guess I’ll cancel.”

You then go because you don’t want to make them feel sad or unwelcome.

What is a Guilt Trip?

A guilt trip involves causing another person to feel guilt or a sense of responsibility to change their behavior or take a specific action. People can use guilt to influence how others feel, think, and act.

This could mean that the person is relying on someone else’s guilt. Other times, it might lead to feelings of guilt and responsibility that are not justified.

Guilt-tripping can be used to communicate indirectly.

Even if you have done nothing wrong, it is possible for the other person to suggest that the problem is yours and that you can help them make their unhappy feelings clear.

It can also be quite effective. You’re more likely than not to do your best to alleviate their suffering if you feel guilty.

Whether intentional or not, Guilt-tripping prevents healthy communication conflict resolution and often triggers feelings of resentment, frustration, and annoyance.

It can also occur in relationships where you care about another person’s feelings or have emotional ties.

Guilt is a way for people to express their frustrations or anger. It’s usually used when they cannot speak out and say what they want.

They may even guilt-trip if they are unable to communicate clearly and assertively; It becomes more concerning when this becomes a part of a regular pattern.

Guilt trips are when someone makes you feel bad about something you did or didn’t do.

Guilt can be a complicated emotion; this complexity is partly due to the fact that guilt is not always bad.

Guilt can be a motivator to forgive and move on if you have made a mistake or caused harm unintentionally.

It is possible to see guilt-tripping as a part of a wider range of behaviors.

People who use guilt to convince you to do something might think they are in your best interest.

In frustration, a parent might say, “We work all the day to ensure you have a roof above your head and food on your table. And you can’t even wash a few dishes.”

If you see they are right, you might decide to pay more attention to your house chores; this will reduce their workload and increase your sense of responsibility.

It may be the best approach to use guilt infrequently if it isn’t part of a larger pattern of guilt-tripping. It won’t likely have any serious consequences on a healthy relationship.

It’s not okay to Guilt-trip someone.

Although it’s okay to feel upset or hurt by another person’s behavior, it can become a problem when you become passive-aggressive and manipulative. Guilt-tripping can be indirect and manipulative; guilt-tripping doesn’t always require sharing your pain and feelings. It’s making other people feel bad, blaming, and attacking. I don’t believe there is ever a right or appropriate situation for guilt-tripping. It will always be a harsh treatment of the other person.

Is Guilt-Tripping a form of Gaslighting?

Guilt-tripping and gaslighting are different, but they share “large areas of overlap.” Gaslighting involves denying the reality of someone to make them question themselves, which is a form of manipulation.

Guilt-trip is more about making someone feel guilty or bad for their actions. Dark personalities like narcissists or other toxic people often use these manipulation techniques.

Guilt trips may be deliberate, but they could also be accidental. You may have guilt-tripped others into doing certain things before.

This behavior is sometimes easy to spot but can also be subtler and difficult to identify. Common signs are:

This type of indirect communication is possible in any interpersonal relationship. It is more common to occur in close relationships with emotional connections.

There are many types of guilt trips, depending on the purpose or goal of the behavior. A guilt trip can serve many purposes, including:

Guilt doesn’t have to be a negative thing. Guilt can be a vital tool in helping to guide moral behavior. People can learn from their guilt and not repeat the same mistakes in the future.

The Impact of Guilt Trips

There are many ways to invoke guilt in order to influence someone’s behavior. It can prevent healthy communication and connections, regardless of whether guilt is used intentionally or not. This form of psychological manipulation can have immediate consequences.

Research shows that guilt trips can harm relationships. According to one study, people who are hurt by criticism from their partners were more likely than others to use their hurt feelings to make their partner feel guilty and get reassurance.

The study found that the partner who was guilt-tripped into giving assurances was more likely than the other to feel significantly worse about their relationship.

In other words, it may be possible to induce guilt in your partner in order to get them to do what you want. However, this comes with a price. It can cause distrust and make the other person feel manipulated.

Guilt trips can cause problems in relationships because they can lead people to feel resentful.

You may feel like your partner will guilt you into doing something you don’t want; this can lead to decreased intimacy, emotional closeness, and eventually, resentment.

Research shows that guilt appeals are a popular type of persuasion strategy. While guilt can sometimes be used to persuade people to do certain things, it can also backfire.

People are more likely to respond to a persuasive message if they feel low levels of guilt. Research has shown that high levels of guilt can lead to failure due to “reactance.”

A person in a state called reactance will act in a way that restores his freedom or at least his sense of freedom; this could be by engaging in actions that are not required. Guilt trips can lead to people acting in a way that is not right for them. You might find yourself calling them less often if they are guilt-tripping you.

Excessive guilt can be linked to various mental health conditions, including anxiety, depression, and obsessive-compulsive disorder.

Guilt can cause anxiety, sadness and worry, muscle tension, and insomnia.

Guilt can eventually lead to shame. Shame can lead to a negative self-image that can cause social withdrawal and isolation.

Read More: What is Delayed Gratification and why is it Important?

How to Cope with Guilt Trips

You have many options when it comes to dealing with guilt trips. Here are some steps to take:

You can also use these strategies to protect your self-esteem and distance yourself from others if necessary. If you feel low about yourself, it’s more likely that you will fall for guilt trips. So find ways to improve your self-worth.

You should reduce your contact with the person who is always trying to manipulate you by making you feel guilty or consider ending the relationship.

Your well-being is a priority. You should not be manipulated; made to feel guilty or shameful.

Talk to your doctor if you feel guilty or are suffering from anxiety, stress, depression, or other symptoms. You can be offered medication or psychotherapy to manage your symptoms and improve your quality of life.

Guilt trips can occur in small, unusual instances or in extreme cases of manipulation. You should get out of the situation as soon as possible if it escalates to the point where you feel emotionally abused. Guilt-tripping can be a frustrating behavior that can be fixed with healthy communication and vulnerability.