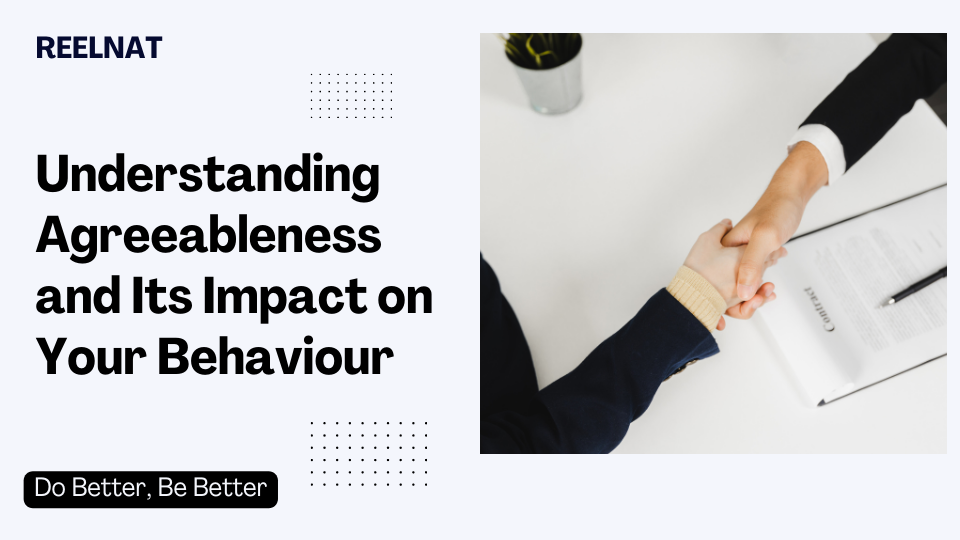 Understanding personality is possible with something called “the five major traits.” This commonly-used acronym, OCEAN, highlights all five of these.

According to the Big Five personality traits, each dimension can be viewed as a continuum. This means that while you might be dominant in one area, such as agreeableness, you still have some of the other four traits in your personality.

Agreeability is a personality trait that demonstrates a person’s willingness to help others. People who are more open-minded are more likely to be more empathetic and enjoy helping others.

A person’s friendliness, kindness, and politeness are commonly described as agreeableness. People who are agreeable are more likely to be liked and will prefer working together over conflict. Having high scores in agreeable tendencies can also indicate that you are able to maintain relationships.

While being friendly is generally a positive trait, it can also have its downsides. Too much agreeability can make it difficult to take criticism. It can also make it difficult to assert yourself and make tough decisions in your professional and personal lives. Overly agreeable people are often unable to move up in their careers. They place too much importance on others’ success, placing themselves in the background of what could be positive steps forward.

All people can be described as agreeable if they can prioritize the needs of others. People who are high in agreeableness experience empathy, and they get a lot of pleasure from helping others and taking care of them.

People who are agreeable are also trusting and open-minded and prefer to work with others than compete. It’s clear that being social can make you more popular in many situations. They are considered good friends by most people.

There are many benefits to agreeableness, but there are also some drawbacks. For example, people who are agreeable may have difficulty asserting their needs and preferences. They may also have difficulty with situations that demand tough decisions or hard love. They may also be so obsessed with helping others succeed that they neglect to plan for their own career advancement.

People who are less agreeable tend to be more competitive, hostile, and antagonistic. These people are more likely to have difficult relationships, which are often fraught with disagreements and breakups.

All of us will meet an agreeable person at some point in our lives. As with other personality traits, agreeableness can be rated from high to low. Below are some sub-traits that can be used to indicate high or low agreeableness.

Politeness or being polite is a common sign of goodwill. This could be in the way you talk to strangers on the phone or how you interact with them.

Empathy and consideration for others are common traits. It is common to understand how another person feels and consider how your actions or those of others can help that person or group.

People who are highly agreeable tend to assume others have good intentions and mean well. They are less likely than others to judge or make snap decisions about people who choose to show compassion and kindness.

People who are peaceful and cooperative are often viewed as more successful than those who prefer confrontation and disruption. People who are highly agreeable will often sacrifice their own needs to meet the needs of others.

This is also very common in a world where people are humble and down-to-earth.

Low levels of agreeability can lead to people who are not patient with others or snapping at basic requests.

Someone who prefers confrontation to cooperation will be more aggressive in their pursuit of what they want.

Low agreeability is more common among those who prefer to criticize others and seek out opportunities to do so.

Low agreeableness, which is a lack of time or in consideration for others in the company and conversation with other people, can come across as condescending, even as a response mechanism, or as if you are merely trying to make a point.

People who are not agreeable often have selfish tendencies. Their priorities are very low when it comes to helping others.

How Agreeableness Influences our Behaviour

Personality testing measures a person’s ability to be friendly, kind, understanding, cooperative, sympathetic, trusting, and cooperative. It is a measure of how well the person fits in with society.

Six sub-traits or facets of the trait called agreeableness can be found within the trait.

A highly agreeable person is more than someone who finds it difficult to resolve issues. They are open-minded and cooperative in helping others achieve their goals.

People who are high in agreeability are generally very down-to earth and don’t claim to be more than others. They are often humble, sometimes to the point of having lower self-esteem.

Someone who is less agreeable might be more arrogant or take advantage of others. They may also try to prove that they are better than others by doing more.

People who score high in agreeability are more likely to be honest and straightforward. They don’t feel the need to manipulate others to get what they want. They are also viewed as loving, genuine people that are easy to connect with.

However, people who score low in agreeability may feel that it is okay to be deceitful, especially if it’s convenient. They may also be more secretive.

If someone is high in agreeability, they tend to be very compassionate and easily move to show concern and care for others. They are also emotionally intelligent and highly empathic, often understanding the suffering and pain of others.

Low scores in agreeability may make it difficult to be kind and compassionate.

People who score high in agreeability are more likely to believe that others have good intentions and do the right thing. They may also be slow to judge others and will often love unconditionally.

Conversely, people who score low in agreeability tend to see others as selfish and believe that they only care about their own interests. They may also view others as a threat to themselves and their well-being.

Read More: Understanding the Openness Personality Trait and How it Affects Your Behaviour

Read More: Why You Need To Be More Independent

Read More: How to Build Self-Respect

What are the Advantages of having Agreeable Personalities?

There are several benefits to employing an agreeable person in the workplace. These benefits include:

It is possible to establish friendships quickly and maintain them. . Highly agreeable people like cooperation and rarely going to fall out with someone over trivial matters. This provides stability in the workplace.

Another aspect of this trait is the fact that your co-workers love that person for many reasons, not just because they are altruistic.

Highly agreeable people are also resilient because they put others’ needs first, and they will find a way to complete jobs. This must be managed so that someone doesn’t end up taking all the blame for a project’s failures.

Agreeability is a personality trait that demonstrates a person’s willingness to help others. Highly agreeable people are characterized by being compassionate and taking pleasure in helping others.

It is generally considered a strength to be agreeable. However, it should be managed properly, as other individuals can take advantage of this good nature.