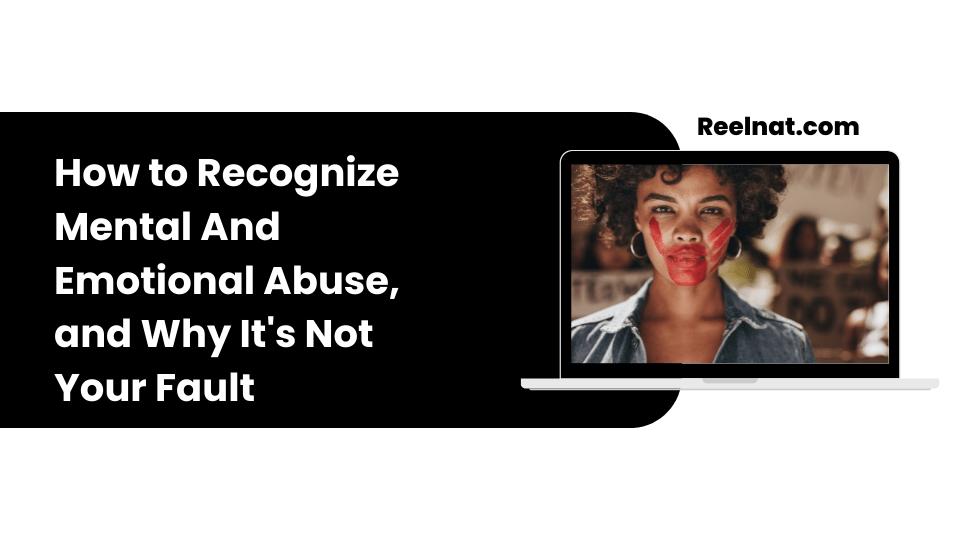 When we think of abuse, it is usually considered something physical, leaving visible marks, but mental and emotional abuse can leave invisible wounds that can be just as harmful. Although abuse can occur to anyone, nobody should be victimized.

If spending time with your spouse or person from your family makes you feel afraid at times, confused, and uneasy, If you feel like you doubt your self-worth when talking to them, you might be suffering from emotional abuse. The aim of emotional abusers is to undermine another’s confidence in themselves and self-esteem. If you’re in a relationship that is emotionally abusive, it is possible to feel as if there’s no way out as well as that without your loved one; you’ll be left with no hope. The act of emotional abuse is a type of domestic violence and can affect anyone at any time of their life, whether it’s as a child, teenager, or an adult.

What Is Mental And Emotional Abuse?

The term “mental abuse,” also referred to as “psychological or emotional abuse,” is the deliberate act of hurting someone, causing them emotional pain, or trying to manipulate or control the victim through non-verbal or verbal communication.

The effects of mental abuse are extremely severe. But, since this type of abuse may take different forms, It can be easy to overlook or ignore; the person who is being abused ignores the situation. In the end, coworkers, friends, and even family members do not recognize it.

If you’ve suffered from physical abuse, it’s likely you’re tempted to take on or reduce the responsibility of the abuse that was verbal, humiliation, and other unpleasant treatment you experienced.

Mental abuse is designed to lower your confidence and makes you feel more miserable about yourself. It’s also a means of control and manipulation. The negative effects of mental abuse can be just as harmful as those of physical abuse.

Signs and Examples of Mental And Emotional Abuse

If you take a closer look, you’ll see the possibility of emotional and mental abuse to be found across different relationships. As a type that is domestic, the intimate partner can be in a relationship that makes one partner be in control of the other, but other family members may have a lot of influence, as shown in instances where children are abused. Abuse of the mind and emotions can also happen at work as well as in friendships as well as other non-traditional settings.

However, while certain relationships may be a particular source of abuse for mental and emotional health, the majority of cases follow the same pattern of conduct which makes it simple to recognize. The indicators of mental abuse are:

The behavior of abuse is related to the desire to retain control and power. A person who is abusive might try to influence you into doing the things they want you to perform, typically by making you feel embarrassed by your weaknesses.

People who are abusive to others frequently seek to establish an order of things that places their victims at the lowest.

A person who is abusive to you will usually attempt to convince you to prioritize their needs while you neglect your own.

Sometimes, they’ll try to isolate you by separating you from your loved ones which will, in turn, make the person more dependent.

Effects of Emotional and Mental Abuse

Physical violence is often viewed as being more severe than emotional abuse; however, it’s not the case.

Abuse of the emotion can cause diverse effects physically and mentally, such as:

Read More: The Difference Between Hearing And Listening: How Each Impacts Mental Health And Relationships

Read More: Signs of a Toxic Relationship and how fix or end it

The signs that someone else is suffering emotional and mental abuse

It is possible that a person you know or someone in your family has been suffering emotional abuse because emotional abuse usually occurs in the privacy of one’s home; it can be difficult to determine whether it’s happening to another person. If you suspect that someone you know is involved in an insecure relationship, some of the items to watch out for could be:

Treatment of Emotional and Mental Abuse

If you suspect that you’re being psychologically or physically abused, get assistance. Suppose you’re imminently in danger; attempt to leave the situation as soon as you can and call for help.

If you’re not at risk immediately, look over your situation and be aware of the following:

The Abuse Is Not Your Fault or Your Responsibility

You may have a strong assumption that the problem is your fault, and you need to find the solution. This isn’t the case. Do not try to argue with your abuser. They will not change unless they are willing to change. They should seek out professional assistance. It’s not your responsibility.

Choose not to participate in the abuser’s games or be entangled in disputes they would like to engage in with you. Be sure to keep your distance from them in the best way you can.

Get Away From the Relationship

If you’re able and have the ability to leave the relationship, then do it. It is important to let everyone know that the relationship has ended and that you’re moving forward to a new chapter in your life. Do not look back.

When you are separated from the person who abused you, Take your time and relax. Understand that it may take some time to recover. Relax with a hot bath and a cup of tea. The worst is over, and the future of your life lies ahead.

The need for long-term, professional help through therapy or support groups can help strengthen an individual’s resolve and aid in helping people believe that they’re not alone in their recovery from the effects of abuse.

This means taking on the extent necessary to force the abuse to stop. This often could mean ending a relationship or breaking ties with a spouse and never talking to them again.

Emotional abuse can take many forms and is often less obvious than other types of abuse. Anyone who notices symptoms of emotional abuse must seek help in any way they feel comfortable.

Mental, Emotional Tags:mind, Self Awareness, self care, self development, self improvement