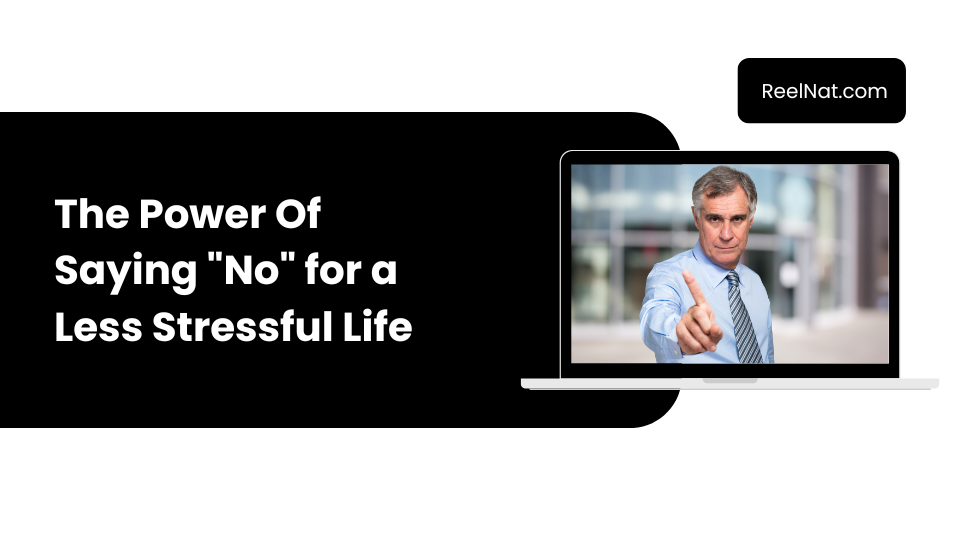 There’s power in the simple act of saying no; however, for many of us, it’s the most difficult word to use.

It’s a fact that you will never achieve your goals if you have too many obligations. You over-stretch yourself, and you won’t achieve anything, or at the very least in a timely manner, if you say “Yes” to every request. This is why being able to say “No” is an effective way to increase productivity.

The Act of Saying “No” for a Less Stressful Life

The biggest hurdle in saying “No” is that we fear we’ll be perceived as negative or ineffective. When we say “Yes,” it is believed to be brave and kind.

The simple decision to say “No” is powerful and is often an act of bravery.

Demands for your time come from all over the place: family, friends, children, coworkers, and so on. To be productive, reduce stress, and avoid wasting time, it is essential to master the act of saying No–an art that many struggle with.

What’s the hardest part to saying “no? First of all, it could make people angry, hurt, or be disappointing to the person to whom you’re telling “No”, and this isn’t a very enjoyable job. If you’re hoping to collaborate with the individual in the near future, then you’ll want to maintain a positive rapport with the person you’re saying “No” to, and using the word “No” in the wrong manner could jeopardize this.

If you’re ever inclined to affirm “Yes,” be aware that you have immense potential in being able to say “No,” and sometimes, it’s the best option.

It doesn’t have to be a burden or a strain on your relationships. Here’s how you can stop people-pleasing and master the gentle art of refusing to be pleased.

Here are Positive Reasons for Saying “No”

Saying “No” is the most effective method to separate yourself from circumstances or people. Remember how important your time is, and you’ll be more likely to feel confident when you have to say “No” to something you aren’t ready to do. It takes solid confidence and will ultimately improve your psychological well-being. If someone asks you to devote some time to a new project and you realize that you can’t complete it, tell them in a sincere manner: “I just can’t right this moment, my workload is too much” They’ll feel your pain as they’re likely to have plenty to do and will appreciate your honesty, transparency, and focus on self-care.

Saying “No” is an act of courage.

“No” is not easy to say without hedging or providing an explanation. It is possible to say, “I’ll need to consider it” and “I’m uncertain, perhaps …” These words don’t only make others confused (is that a no or yes?) but can also weaken your conviction about what you’d want and like. When you refuse to give an explanation after saying “No,” it’s courageous.

Even if you have some spare time (which, for a lot of us, is not a lot), is the new project really the way you’d like to spend your time?

If, for instance, your spouse requests you to pick up the children from school two extra days per week, you’ll be most likely to schedule it since your family is likely to be the top priority. But, if a coworker wants help with additional projects, you are aware this could mean less time with your family and spouse, which is why you’re more likely to decline.

For others, they are more focused on work, and assisting on other projects could lead to the possibility of being promoted or given a raise. It’s all about understanding your goals for the future and knowing what you’ll have to say “Yes” and “No”  to achieve them.

Not everything is your responsibility.

If you’re a person-pleaser, you may feel that it’s your obligation to say “yes” to all and anything. However, the reality is that making other people feel happy isn’t a person’s job, and certainly not everything is yours to do.

It is impossible to please everyone, and making promises to everyone could hinder you from being successful in your work. Choose what you want to take on and concentrate on ensuring that you keep your promises.

If you say “No,” you already know what you want.

Instead of instantly responding to a query or demand, take some time to think, “What do I really want?” Sometimes, for various reasons, we perform actions we would rather not do. However, if you are constantly doing things even though you’re not taking a look at your personal requirements, it is possible to build anger, which could cause damage to relationships.

Practice makes perfect, they say. Being able to say “No” as often as you can is an excellent way to improve at it.

Sometimes repetition of the word is the only method to get a message to extremely insistent people. If they insist on it, keep saying “No,” In time, they’ll get the message.

Do not be afraid to stand on your feet.

Certain people will not refuse to accept “No” as a response. They’ll push you, nag you and think of many different creative ways to get you to say yes. They pose a problem in your quest to create a positive and productive one. When you’re confronted by people who won’t stop insisting, be firm and repeat your original response. If you are unsure, consider the reasons that led you to decline initially and think about how great you’ll feel when you stay loyal to yourself. This determination will carry through other areas in your daily life.

The most typical way many people begin is to say “I’m sorry but…” because people believe that it’s more professional. Although politeness is essential in learning to admit defeat and that you were wrong, this is not of those times; apologizing makes it sound less professional. It is important to be firm and uncompromising about protecting your time.

You’ve got no reason to feel guilty about it. It is right to make sure you are taking time for the things that matter to you.

Each time you refuse to do something, you’re also accepting another. It means that you are freeing up your time (and sometimes the emotionally-driven bandwidth) to take part in different and perhaps more rewarding activities. If you’re feeling hurt for letting someone down, reconsider your approach and offer the opportunity to come back later for something you know you wish to complete.

Also, it’s essential to be polite; however, if you make it easier for others to take advantage of your precious time (or money) in the future, they’ll continue to do so. But, if you put up walls or establish limits, they’ll look for targets that are easier to grab.

Make sure that your precious time has been secured by denying the many requests (that do not belong at the top of your list) as you can.

It’s usually much simpler to anticipate requests rather than simply say “No” to them after the request has been submitted. If you are aware that such requests will likely be made, for instance, at a meeting, simply tell everyone when you get into the meeting.

“Look, everyone, just to let you know, my week is booked full with some urgent projects, and I won’t be able to take on any new requests.”

Once you’ve gotten familiar with this, it’s very beneficial.

Read More: How to Stop Being a People-Pleaser

Read More: Is it possible that I have an inferiority complex? What Can I Do to Get Rid of It?

Read More: How To Become a More Thoughtful Person and Why It’s So Important

I’ll get back to you.

Instead of responding immediately, it is usually more appropriate to tell the person that you’ll give it some thought before responding to them. This will let you consider the issue and also review your priorities and commitments. If you are unable to accept the request, consider saying “No” in this way:

“After giving this some thought and checking my commitments, I won’t be able to accommodate the request at this time.”

You took the time to think about it.

You have to commit to yourself.

Most of us consider commitments as promises made to other people; however, it is crucial that your commitments include you because everything we do has to begin by being committed to ourselves.

The classic rejection of a date is also applicable to other situations. Be honest about it, however. Most of the time, in cases where the person or project you are considering is good. However, it’s not for you, not right now.

You can say that you like the idea, the plan, and the person or company but say it’s not a good match or isn’t the right fit for you right now. Be sure to only say this if you’re sincere because people may detect insincerity.

It’s not something that’s easy to master; however, once you’ve mastered it, you’ll notice yourself less stressed and more focused on important things to you. You do not have to feel guilty about managing your personal life and your mental well-being in a manner that is comfortable for you.

The power lies in the act of saying “No.” When you say “No,” don’t lie. Do not make excuses for yourself or over-explain. Just decline. It’s that easy, and it is that effective.